While a revolver may not be the optimal solution if you are fighting an actual war, Airsoft is quite different.

There are many Airsoft players, some of them incredibly good, that prefer to use a revolver over a rifle or a sub-machine gun.

However, it is important to know which revolver to purchase. While an extremely expensive model may be great, you might be able to get similar performance from a cheaper model as long as you know what to look for and what your style is.

We will take you through the criteria for selecting the perfect revolver for Airsoft, before recommending a few revolvers that have proven themselves on the field time and time again!

Based on the criteria listed above, here are 4 revolvers that are great. We have tried to mention a specific area where they excel for each of them so that you can find one that is tuned to your playstyle.

The ASG Dan Wesson is not only meant for the competitive Airsoft player, but also for the Airsoft collector. In every single way, it tries to replicate a real revolver. Every single revolver even has a unique serial number engraved onto it.

The body is completely made of metal, and it is immediately obvious that this is a revolver that was built with quality in mind. Its reloading mechanism is also quite realistic, with individual cartridges used instead of a disc.

However, just because the ASG Dan Wesson tries to be as realistic as possible does not mean that it tries to follow the design philosophy of ancient revolvers. There is quite a bit of modern technology that allows you to have fun on the field such as a removable weaver rail which can be used to attach sights, lasers, and flashlights.

The rear sight is also adjustable, and each revolver comes with a speed loader that can be the difference between you winning and losing on the field. Sadly, the revolver is not very adept at long range. With the ASG Dan Wesson, you can expect to be accurate at up to 65 feet. Beyond 100 feet, the revolver is pretty much useless.

Still, all things considered, this is the best revolver you can purchase for Airsoft right now. The build quality, performance, and realism transcend most other revolvers available for purchase, especially in this price range. 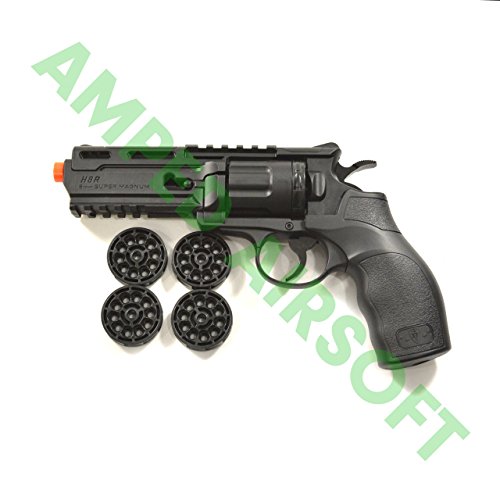 The ASG Dan Wesson tried to be as realistic as possible and did a great job at it. The Elite Force H8R Revolver, on the other hand, does not try to come close to real shooting. Instead, it is built with the Airsoft player in mind and is quite decent for indoor fields.

First, it has a 10-round magazine to make sure you have a few extra chances of taking out your enemy. On top of that, it has discs that you can reload almost instantly in the heat of the battle. The weapon comes with 5 discs which means you will have 50 shots before you need to pack your magazines again. Sadly, it is possible to lose your magazines on the field unless you keep them in a dedicated pouch and are careful not to misplace them.

In order to facilitate competition, the Elite Force H8R has two rails for attachments. I recommend using a laser on the bottom rail and a red-dot on the top rail. This is pretty much the ideal setup for any revolver in Airsoft. This should allow you to be effective at up to 80 feet. Sadly, like the previous entry on this list, the H8R is not effective beyond 100 feet.

If you are someone who does not care about realism and instead wants a gun that can help you be a killing machine on the field, then the Elite Force H8R is for you. 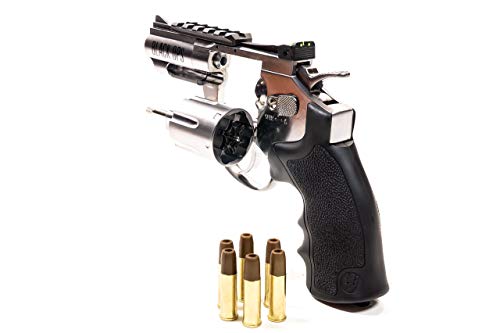 The Black Ops Exterminator is one of the most popular Airsoft revolvers in the world and with very good reason. Firing at over 500 FPS, it has enough stopping power for you to compete with rifles in an outdoor field. Of course, you will still need to position yourself in such a way so as to be close to them due to the Exterminator’s shorter range.

The customization options that are available to you are by far the biggest reason t go for the Exterminator. You can purchase the revolver in both 2.5” and 8” barrel versions. On top of that, you can also decide between a chrome (my favorite) and a gunmetal finish. The gunmetal finish has an additional variant that gives the revolver an ‘aged’ look.

The Black Ops Exterminator is not all looks. On the field, you can easily fire at over 100 feet with great accuracy. However, the effective range does start to dwindle soon after that so you still need to be careful. You are using a revolver after all!

As is the standard, you only get the top rail if you go for the 2.5” version and you get 2 rails with the 8” version. I would recommend using the same laser/red-dot setup with the Exterminator.

Overall, the Exterminator is a great weapon for someone who plans to play Airsoft in outdoor fields for the most part. Those who like their weapons to have a sense of style will also love the customization options that are available. 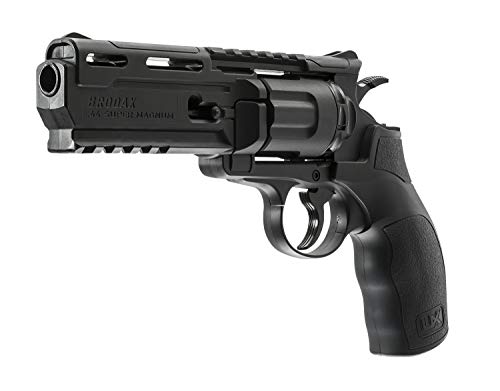 The last option that you can go for is the Umarex Brodax Air Pistol. This revolver is by far the cheapest one on this list, and there is a reason for that.

Even though the Brodax has metal parts on the inside, the frame is polymer. This means that it has a much higher chance of suffering from wear and tear, especially when used extensively. The problems in build quality are further emphasized once you look at the clip, where the BBs do not fit properly.

Still, the Brodax performs better on the field than most other revolvers in the same price range. Not only is it fairly accurate, but it also has enough range for it to be a viable weapon for indoor Airsoft.

What I really love about the Umarex Brodax is that despite its extremely low price tag, the manufacturer has not skimped on features. You still get access to two rails upon which you can attach lasers, flashlights, optics, etc.

Overall, I would advise against using the Brodax if you have the funds for any of the other revolvers on this list. However, those on an extremely tight budget will find the Umarex Brodax Air Pistol to be a serviceable weapon that gives them a fair chance of fighting other players.

Why Use a Revolver for Airsoft

The revolver may very well be one of the most efficient weapons in Airsoft. The great thing about it is that it is easy to pick and can be used by beginners. However, it has a really high skill-cap that can be utilized by professionals to get the most out of the weapon. Here are some reasons why a revolver is great for Airsoft:

The reason that people go for a rifle over a standard pistol is its power. However, a revolver is usually much more powerful than a pistol and thus is able to be effective on the field. Of course, a rifle will still be more powerful, but the other advantages mentioned after this make revolver an amazing weapon for Airsoft.

This is the main reason to go for the revolver. A rifle can be difficult to handle due to its weight and length. A revolver, on the other hand, weighs slightly more than a pistol and is about the same in length.

Another major aspect of a revolver is its weight. Since it is extremely light, it is much easier to move and hide from your opponents. Someone with a rifle has to carry magazines along with a hefty weapon and may be much slower than you if you have a revolver.

You may be apprehensive of revolvers because you only get 6 shots. A rifle, on the other hand, will give you 20 to 30 shots on average to hit the target.

However, reloading a revolver is much easier. Once you empty your mags, reloading a rifle in the middle of the fight is extremely difficult and takes a lot of time. However, you can reload a revolver much more quickly.

Of course, you will need to be much more careful and deliberate when using a revolver since you do not have as many rounds as a rifle. However, you will easily be able to reload and have the maximum ammo available if there is a break in between the firefights.

What to Look For in an Airsoft Revolver

Many indoor Airsoft fields will not even allow you to use the revolver due to its velocity. However, revolvers are perfect for an outdoor field when they are combined with heavy BBs.

Revolvers are usually very simple and contain only a few parts. However, you need to be aware of the following when looking for a revolver to purchase.

If your revolver fires at over 500 Feet Per Second, then you will not be allowed to use it in most indoor fields. Sadly, the vast majority of premium Airsoft revolvers do fire above that.

Ideally, you should try to go as high as possible when it comes to velocity as it will help you compensate for the low-range of revolvers. Still, you may want to opt for one that is below 500 FPS if you plan on shooting it indoors. Luckily, we have listed revolvers that fire above and below this threshold.

Revolvers, despite their small size, are usually able to fire at a decent amount of velocity due to them being CO2 powered, which takes us to the next talking point.

A spring-powered revolver will not only fire at a lower velocity, but it will also require you to cock the revolver before firing every single shot.

A CO2-powered revolver, on the other hand, will be able to fire at the target as soon and as quickly as you can pull the trigger. In most cases, a CO2 powered revolver will be best.

I am sure you are already aware that you should always prioritize metal construction over a plastic one. A metal revolver will be more durable and less likely to suffer from wear and tear when you are on the field.

The main reason people often buy plastic Airsoft weapons is that they are very cheap. However, remember that there is no point in saving money if you cannot use the weapon properly. On top of that, there is a decent chance that a cheap weapon will break easily and need replacement.

Also, remember to employ the same decision-making criteria when looking at ammunition cartridges, as metal cartridges have been known to hold themselves better and allow for more consistent shooting.

The fact that you have only a few bullets is handicap enough. There is no reason for you to further amplify the difficulty you face on the field by opting for a revolver that is unable to reload in an efficient manner.

Make sure that unloading the shells is easy and you are able to have your revolver ready to shoot after a few seconds of emptying your clip.

Revolvers may not be for every Airsoft player. In fact, most people who are easily able to move with a heavy rifle will probably still pick it over the revolver as raw power often matters quite a lot in close quarters, especially when you combine it with a larger clip.

That said, a revolver is a much better option than a pistol, and will be perfect as a secondary weapon if you do not want to use it as a primary one. The ASG Dan Wesson is a great example of this as it combines a realistic look with quality performance. While other revolvers on this list are all great at one thing or the other, the ASG Dan Wesson surpasses them, all things considered.