The Ruger precision rifle is one of the most popular bolt action firearms in America, and for good reason. It’s highly configurable but always offers fantastic accuracy and long-range stopping power regardless of the build specifications. For these reasons, it’s useful for target practice competitions and for hunting scenarios.

But you can make the Ruger precision rifle even more accurate at a distance with a fantastic bipod. Bipods can enhance your stability and work well with the controllable recoil already inherent in the rifle’s design. Let’s take a look at the best bipods for Ruger precision rifles now.

In a hurry? Check out the table below to see a helpful overview of each of our favorite products. Keep scrolling down to see a more in-depth review of each item. 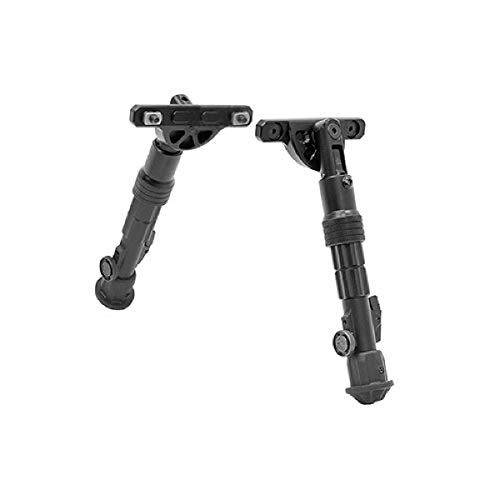 It’s a well-designed and innovative bipod that’s perfect for those looking to get the most out of their Ruger rescission rifle.

This high-quality bipod is a little pricey compared to several others on the market, but it comes with a versatile M-Lok adapter, allowing it to work with a variety of rifles. It features an ergonomic and spring-loaded slide locking ring. This enables you to quickly deploy the bipod as soon as you need it and in a variety of uneven terrain types.

The bipod is made of aircraft-grade aluminum and has a matte black anodized finish. This affords it fantastic corrosion resistance and increases its value for money. We also really like that it only weighs about 10.8 oz and has a rubberized stand that will help keep the bipod secure even in slippery conditions.

Even better, the bipod comes with five locking positions. This allows you to hold your Ruger precision rifle at specific height clearances or angles for perfect target acquisition and long-distance sniping. You can even flex between these positions with a thumbwheel, removing the need for advanced tools just to adjust things. 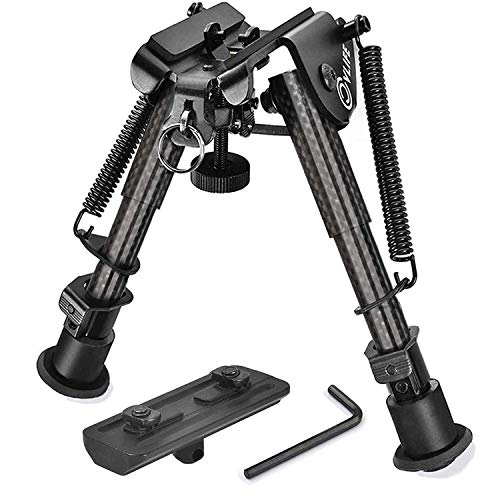 Ultimately, this is a more affordable alternative to the original pick, made with carbon fiber material. It’s just as durable and even a little lighter overall than aircraft-grade aluminum.

This affordable bipod can extend its legs between 6 inches and 9 inches – a perfect choice for most hunting or target practice needs. The legs are bolstered by double rods on the inside and outside and each leg is made with carbon fiber, one of the best materials for bipods and other rifle accessories.

The legs can be quickly folded back up thanks to special return springs. This could be advantageous if you need to pack up and move positions in a hurry to pursue your target. The bipod is corrosion and rust-resistant and can even work capably in hot or cold temperatures. The legs can also be preset along five premade settings to enable you to adapt your firing angle quickly in a pinch.

Finally, it comes with an M-Lok adaptor, enabling you to fit it to your Ruger precision rifle regardless of build or design specifications. 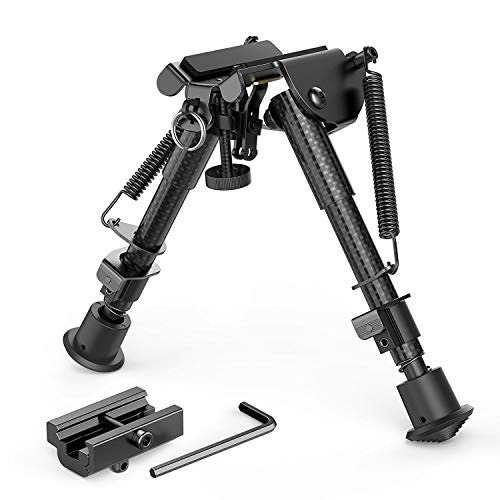 This is another carbon fiber alternative for a similar price as the last choice. It’s also a little better for those concerned with the underside of the rifle as the padding isn’t as harsh.

The XAegis bipod has legs that can extend between 6 inches and 9 inches and it utilizes a Picatinny adapter, so make sure your Ruger precision rifle has this rail before purchasing. If it does, you’ll be able to take advantage of the carbon fiber construction all across the bipod’s surface and interior. It’s lighter than aluminum but stronger than steel.

The XAegis also features a stylish aesthetic that will work excellently with a wide variety of rifle builds and colors. It comes with a hex wrench and adapter you need to easily install it to the fore-end of your rifle. The legs can be quickly adjusted and feature adjustable return springs with five preset measurements. Snapping the bipod to the right elevation for your next shot is quick and easy as a result.

The Scout-Pod bipod is an excellent pick if you want to have your elevation a little higher than the average axman and want an exceptionally stable bipod with a unique design.

The Scout-Pod bipod has a slightly different leg height series than most other choices; it can be extended between 7.3 inches and 10 inches. This makes it great for bigger rifle builds or for marksmen that want to use their Ruger precision rifle at different angles from the norm.

It utilizes a cuboid design to afford you fantastic stability, and it has a dual-axis pivot and swivel mechanism. You’ll be able to track moving targets fairly easily thanks to this design. Even better, you can mount either Weaver or Picatinny-based rifles on the deck, so it’ll work for most Ruger precision rifles.

Further, it features a quick-release system to let you snap the bipod closed and move to pursue your target if necessary. The auto-retractable legs and a threaded housing for optional parts round out the purchase and make it a great choice for most marksmen. 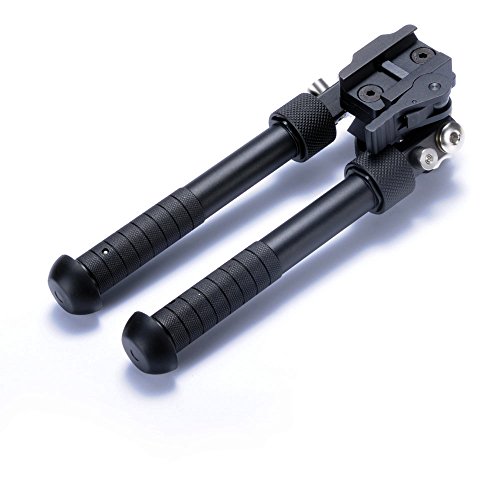 This Woltis bipod is fantastic for those looking for a highly customizable option with plenty of control. It allows you to adjust and track your target and has one of the most durable builds we’ve seen overall thanks to its materials and smart construction.

This Woltis rifle bipod pick can extend its legs between 4.75 inches and 9 inches: a wider range than most others. It’s made with aircraft-grade aluminum and has a hard-anodized finish, which protects it from corrosive damage and prevents it from flashing in the sun.

Furthermore, it can lock securely in four different positions, along with 90° and 45° angles so you can track your target from elevated positions. It even allows you to pan from side to side and has adjustable tensions for the legs. All in all, it’s quite a customizable and individualistic bipod choice.

It does feature rubberized feet for stability, and they’re quite durable themselves. The only real downside is the lack of Weaver mounting compatibility; this bipod only works with Picatinny-style rifles.

Is a Bipod Worth It?

Bipods in general are used to assist with stability and long-distance accuracy, making them favored accessories for both target shooters and for hunters. Bipods are a little easier to set up and put away than tripods but offer more stability than monopods. Most great bipods also have the ability to let you swivel your weapon from side to side or up and down, allowing you to track a moving target and still benefit from the bipod’s stability.

The Ruger Precision Rifle is a bolt action firearm that’s highly configurable and offers an extremely steady recoil pad. This makes it a favorite instrument for accurate marksmen or long-distance hunters, especially since you can combine it with several different calibers of ammunition.

Because of these advantages, many people love to combine their Ruger precision rifles with excellent bipods. Using the bipod will allow you to hit even more distant targets and alleviate any stability problems you might get from setting up your rifle on uneven terrain, like when you’re hunting.

What to Look for in a Great Bipod

When you’re trying to find an excellent bipod for your Ruger precision rifle, keep the following factors in mind and you’ll be more than satisfied.

First and foremost, pay attention to the materials that comprise the bipod. Most typical bipods are made with one of three materials: polymer, aluminum, or carbon fiber. Polymer is the least expensive of the bunch and affords decent durability without making things too heavy. However, it’s not quite as durable as either of the next two options and is still the heaviest of all three.

Aircraft-grade aluminum is usually a much better choice because it provides just as much durability as most polymer materials without weighing as much. This makes it easier to set up or pack the bipod away in a hurry or carry it with you in a backpack.

The most expensive material is carbon fiber, which is just as durable as full steel without weighing nearly as much. This is a great material if you want the best bipod possible.

Most bipods have extendable legs that can raise their tops between 6 inches and 30 inches, although most models have a much shorter range, like 6 inches and 9 inches or 14 inches to 20 inches. Be sure to pay attention to the extendable range each bipod offers and consider which will work best for your needs and your Ruger precision rifle build.

Heavier rifles will often want slightly higher elevations, or you may want something close to the ground if your rifle is lighter and a little slimmer. Consider terrain as well; higher elevated bipods won’t run the risk of rubbing your magazine or other parts against the ground as you set the rifle up.

Some bipod can be mounted on just about any rifle, while others have more limited mounting options. Keep these in mind as you browse, as it’s especially valuable to find a bipod that is perfectly sized and mountable with the Ruger precision rifle. Some bipods can only be mounted with certain rails or systems, too. Again, keep this in mind if you want to combine the bipod with several attachments that may have their own rail limitations.

Some bipods have adjustment mechanisms that only allow you to change the height of both legs at the same time. Others may have independently adjustable legs. This latter option is usually a much better choice, as it will allow you to balance the bipod on uneven terrain much more frequently.

It’s also a great choice for fine-tuning your elevation and making sure you get the best performance from the bipod and the extra stability it’s supposed to provide.

Some bipods are relatively stationary while others offer fantastic panning or canting angles. These angles allow you to tilt your rifle up or down or left or right without having to remove the rifle stock from the bipod. This lets you keep the enhanced stability afforded by the bipod without having to move your rifle to track a moving target.

Hunters will make more use from this feature than others, of course, but it’s a great feature that almost any bipod user will want to think about.

Overall, the top bipod for your Ruger precision rifle will depend on your preferences, the specifications of your rifle build, and what you’ll use the rifle for most often. Keep all of the factors we mentioned in mind and you should be able to find a great pick from one of our recommendations above.